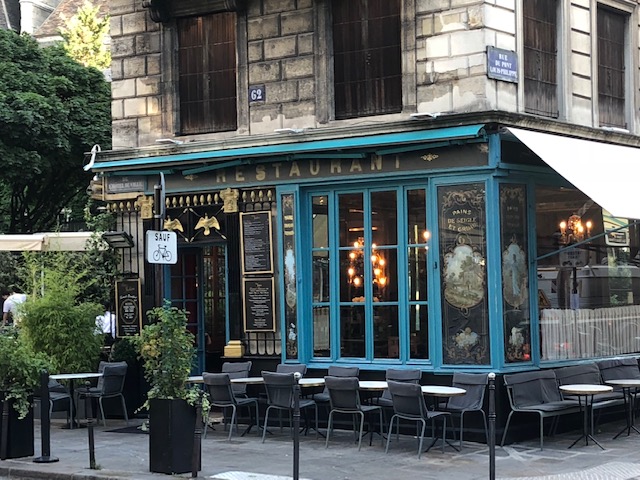 Our neighbors from Greenville, the Bittrick family were planning a trip to Europe this summer and it just so happened that they’d be in Paris the first week that the boys were out of school/ our first week of summer! Finn is one of Wells’ best buddies from Greenville and when they were smaller, they would play almost every single afternoon together.

We all arrived into Paris on a Sunday, they arrived in the morning and our train came in late afternoon.

We met them for dinner at a cute restaurant in Saint-Germain, Café de Paris and we sat outside on an absolutely beautiful evening. 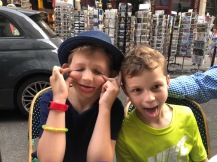 Wells was excited to show Finn what “lemonade” means in French- literally a carafe of squeezed lemon juice, a carafe of water, and a bottle of sugar to dump into it….

The boys and I stayed near Notre Dame on a quiet street, one block closer to the river from Boulevard Saint-Germain in a tiny air B&B.

The Bittricks had plans to go see the Eiffel Tower that next morning, and since we’d been a few times already, we planned to go to the Musée du Chocolat. But first, coffee and breakfast. We loved Obla-di Café in the Le Marais district. Best smoothie bowls EVER! 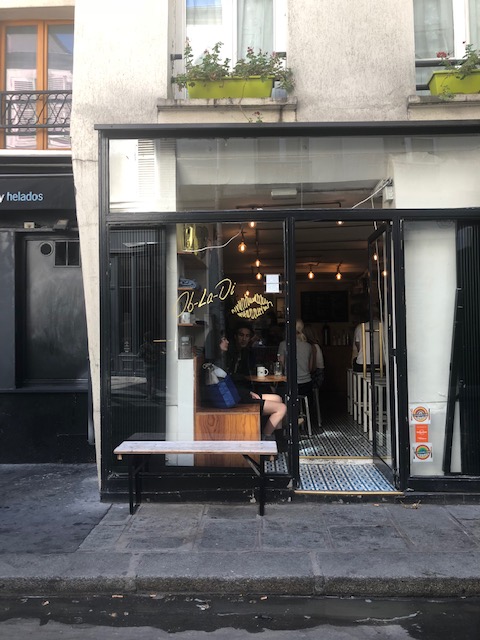 The chocolate museum was great. We learned so much about the origin of chocolate and how it was eaten and used hundreds and hundreds of years ago. It is still hard to believe that it didn’t even make it’s way to France until the 1800s!

And that today, the biggest consumers of chocolate are the Germans! We Americans (and the French) are way behind the Belgians and Swiss too!

At the end of our tour, the souvenir “bag of chocolate” that I’d ordered with our tickets for each of the boys was WAY more than we expected! 500 grams each!

Essentially, I would end up carrying 1.5 kilos of chocolate around with me the rest of the day!

That afternoon, we met the Bittricks to go to the Louvre. It’s hard to believe that we have lived in France for 2 years and still have not been to the Louvre yet. Everyone was super excited to see the Mona Lisa (“La Jaconde” in French) but it was no quick feat.

Even with tickets, we needed to wait a bit to get into the museum and when we got inside, it was crowded and WARM.

We opted to buy the audioguides which were on a Nintendo DS that we each got to carry around as we navigated through the museum but, as it turns out, they didn’t work too well. At first I thought it was just me, but as we went through, none of us could really seem to figure them out and would have bee better off with just a paper map.

When we finally made our way into the room where Mona was, it was something to see. And I don’t mean the painting itself.

The room was PACKED with people all trying to catch a glimpse of this tiny framed photo behind this huge panel of glass.

All the rest of the walls in the room were blank which made her seem even smaller. People were shoving and pushing trying to make their way up front and holding their cameras way up in the air, trying to shoot a pic. It was madness!

As Christina pointed out, half the people’s first glimpse of her would be on their phone screen!

We had to laugh as we saw people around us shooting pics and then feverishly posting on Instagram at the very moment they were in the room and not even up close to her yet!

We were so thankful to Jon for lifting the 2 smaller boys each up high so that they could see her.

At one point people were shoving so much that Christina and I got a bit separated from our crew! This nice lady took Owen under her wing pushed a path through for him so that he could get up close.

When we finally got up to the very front, the security guards decided to do a giant flush out of the entire room and forwarded everyone along; they weren’t letting anyone else stop in front of the painting to take a photo up close. Charlie was way up in front of us and grabbed some good pics.

Honestly in the end, there were so many other paintings and displays that we were more amazed by throughout the museum.

Even with reading the story about Mona and the reasons why she is so famous, we were unfortunately underwhelmed.

That evening we ate at Le Breizh Café, a well-known crepe restaurant in Paris which I’ve been told has the best crepes. We had made reservations a few weeks ago to be sure we could get a table. In the end, we ended up having to split up into tables of 5 and 3 because they didn’t allow tables of 8, but it worked out. The kids managed well at their own table and we were in and out quickly, rushed a bit by the fact that they had a second seating at 8:30. The food was good, but it was the first time since living in France that we’ve been told the next guests had arrived and were ready to be seated at our table. The fact that we could all eat crepes, salad, wine and dessert in an hour would have seemed impossible!  Luckily, we weren’t hoping for a long relaxing meal, otherwise we would have been a bit disappointed I think.

The boys and I took our time walking home after dinner and no one was in the mood to go back and go to bed. Owen had “saved” his dessert for an ice cream shop he’d seen on the way to dinner and he chose well! 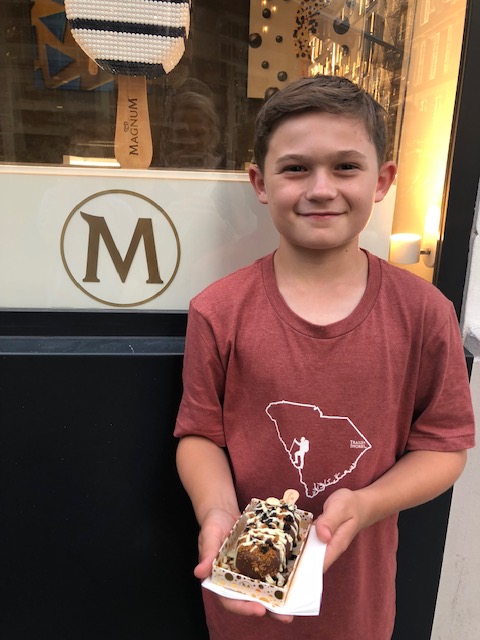 As we walked over the Pont Marie, the sunset was just beautiful. 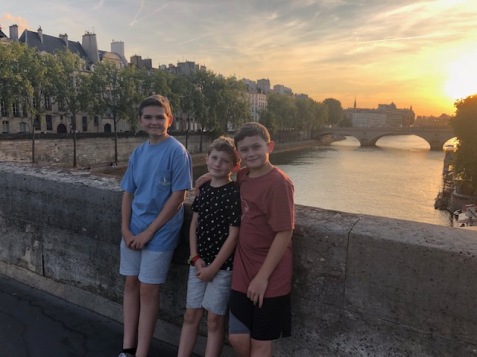 From above, you could see people all along the river sitting and having picnics, catching up with friends, it made me think about how there’s this whole other part of Paris that you don’t know about when you are up above walking the busy streets, crossing bridges… there’s a whole other “layer” to Paris down below- restaurants, bike paths, etc. 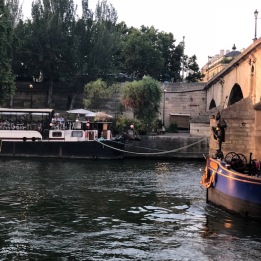 The sun didn’t set until 10 o’clock so we hung out near the river for awhile, watching all the boats go up and down the Seine. 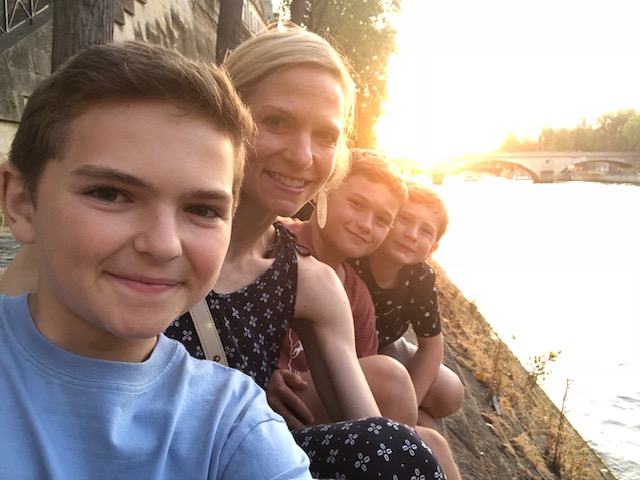 The next morning, we woke up and walked to Le Peloton Café, a cute little coffee shop in Le Marais also that is owned by 2 guys  (American and Australian) who are big cyclers and run Bike About Tours, a bike tour business out of the café… one of their specialties is waffles, so the boys were excited- they go nuts over real Belgian waffles. 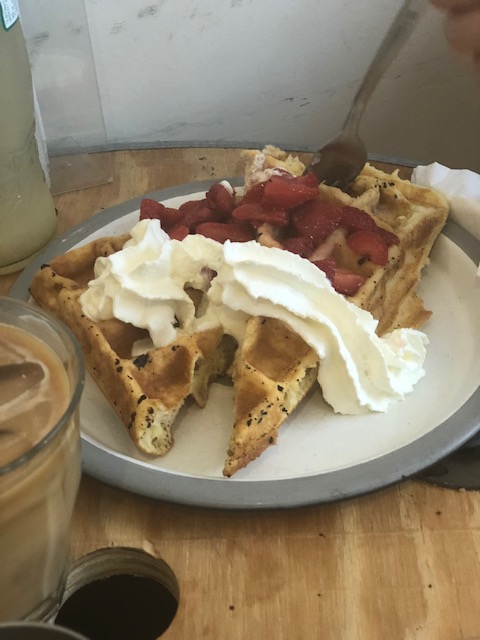 On our way to meet the Bittricks, this little guy passed us as we were walking over the bridge onto L’Île de la Cité… he was all by himself and the boys were begging to snatch him up and adopt him forever… 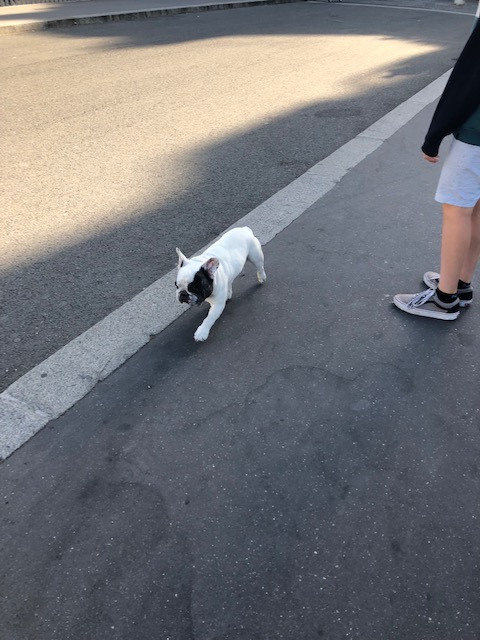 But he was on a mission, like he knew exactly where he was going….

We spent the morning at L’Atelier des Lumières, a digital art museum that opened in 2018, known for its’ immersive art exhibits.

At the time it opened, it featured works by an Austrian artist, but for the last several months, the exhibit now features many of Van Gogh’s most famous works and has attracted thousands of people from all over the world.

The museum is located in a renovated foundry (warehouse) in the 11th arrondissement, a working class neighborhood.  One of the owners of Le Peloton had told us that the museum has been so successful since its opening that the influx of tourists has led to development in the neighborhood and a rapid gentrification process; some residents have had to relocate due to the rent increases!

Inside the auditorium, there are 2 levels in a big open room with benches sporadically placed and people wander around, stand or sit but as the images are reflected on the walls, ceilings, floors, you are able to be fully immersed in the art everywhere you look….

Besides being surrounded by the most beautiful reflections of VanGogh’s works all around you, you literally become part of the art, which the kids had so much fun with. 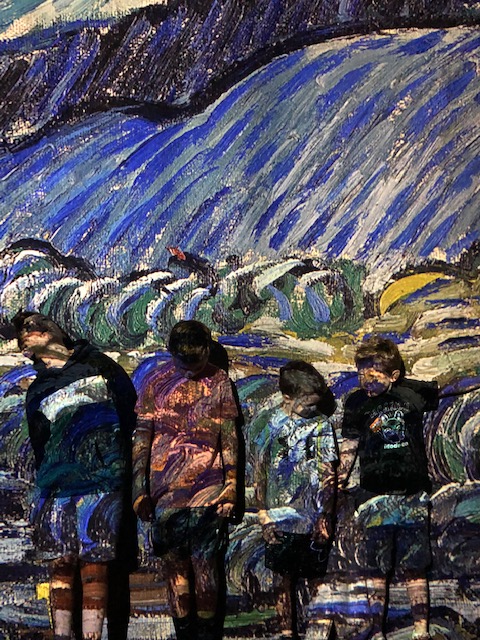 They even had a big room full of mirrors for the kids to play in..

and pools of water below the floor reflecting the images as well.. 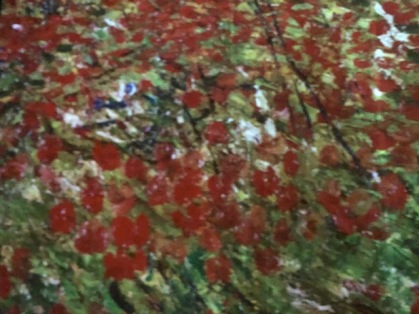 The Japanese art was also incredibly beautiful and the art actually comes to life! The fish swimming through the ocean, the waves, the lanterns twinkling, the geishas whose eyes blink…

Next, we metro’d to Montmartre and Sacre Cœur. It was a beautiful afternoon.

We were lucky to find some great street artists that were offering portraits of people walking along and this guy just so happened to be finishing up with someone else when Charlie and I noticed his work and loved it so we hired him! He did such a great job with Charlie and Finn’s sketches and told us that he will be featured next year on a Netflix show about his life as a street artist in Paris. We will be looking out for JC Maxim!

We had a great lunch in the center of the village and Maddie wasn’t feeling great, so she and Jon headed back to the hotel and Christina and I took the boys to the Supreme store in Le Marais- Charlie’s one request while we were in Paris! 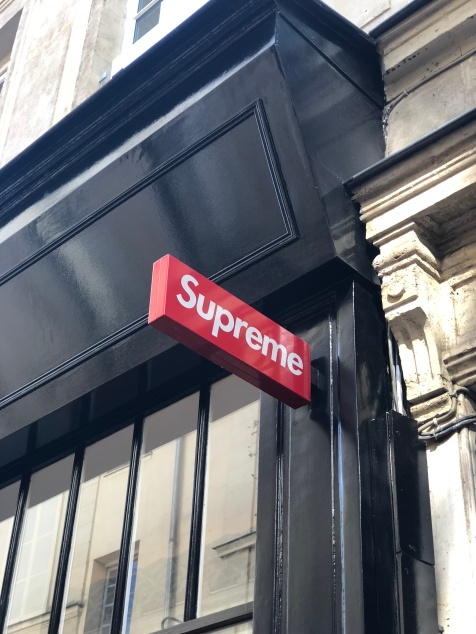 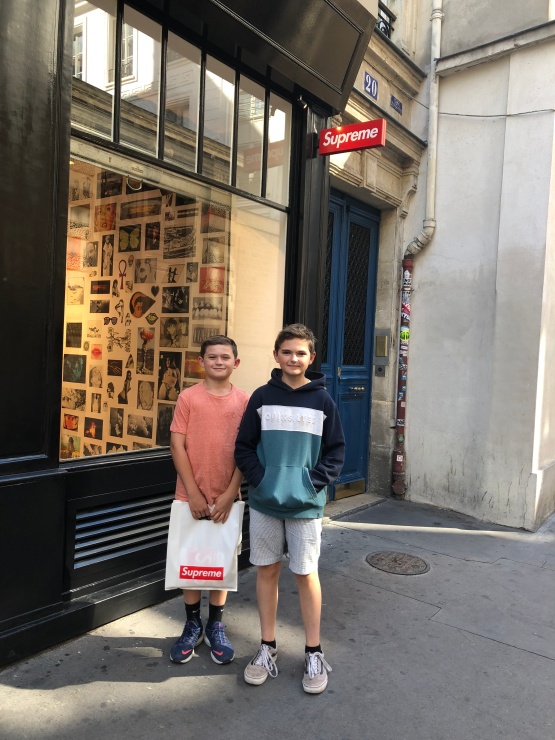 After the Supreme store, we walked past Notre-Dame and it was both sad and shocking to see how significant the recent fire damage was. 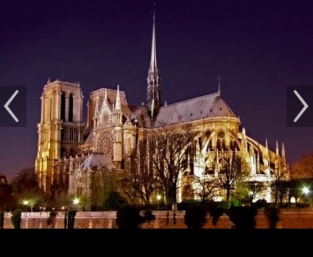 The kids were tired and hungry after a full day of walking so we opted for an early dinner at an Italian restaurant in the Latin Quarter. 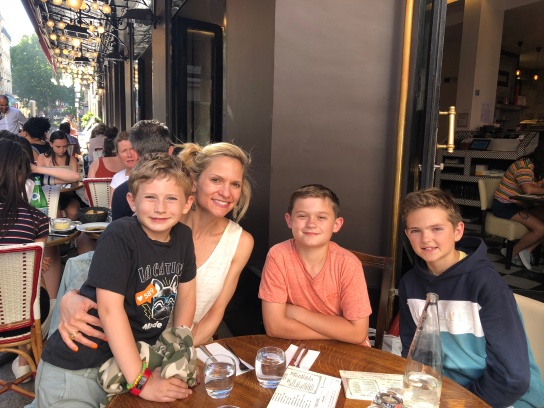 The boys and I were heading back to Clermont the next morning, so after dinner it was time to say goodbye….

Not easy, but knowing we will be living next door to each other again soon made saying goodbye a little easier for us 🙂 and they were off on more adventures throughout Europe, so we were super excited for them! 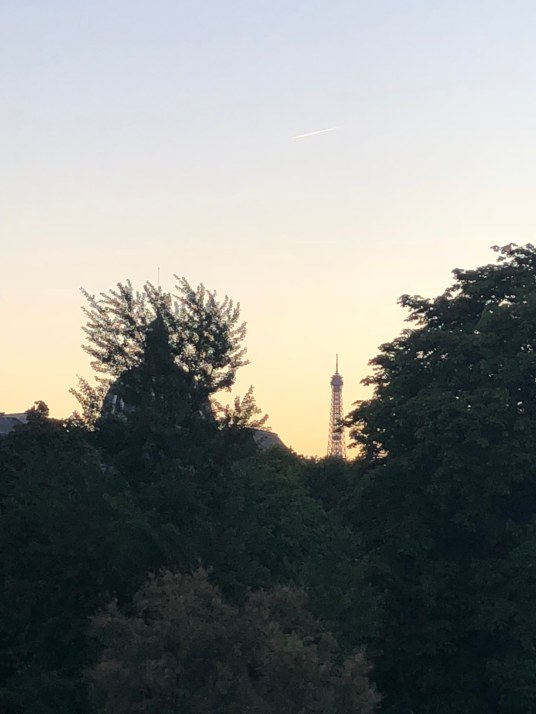 Later that night after showers, we walked to Pont-Neuf hoping to see the Eiffel Tower sparkle, which it usually does every hour on the hour. If you aren’t actually at the Eiffel Tower, we’ve found this to be a great spot to view it from afar.

Considering the sun doesn’t even set until 10:00 at this point in the summer, I had read that the Eiffel Tower lights up at 10:00 in the summer, or nightfall. We got there at 9:50 and staked out our spot which was lucky because there were lots of others stopping to watch also… 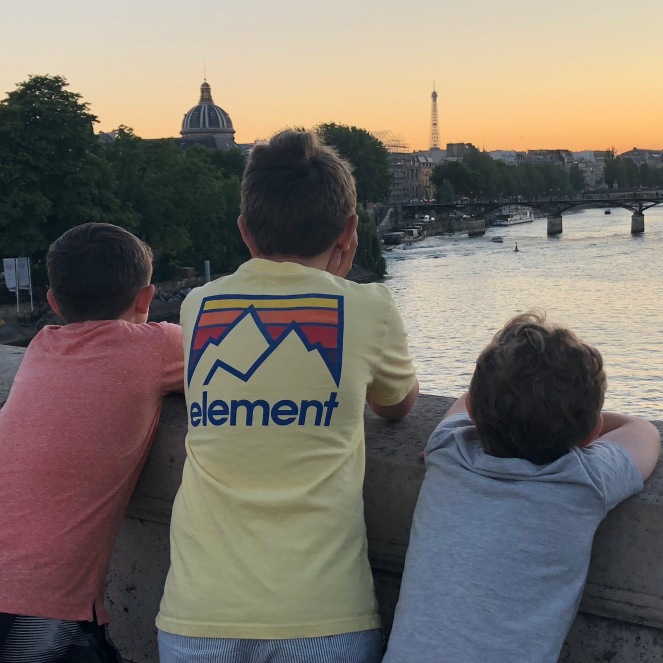 My phone was about to die so we knew we wouldn’t get a photo, but in the end, the lights never came on! 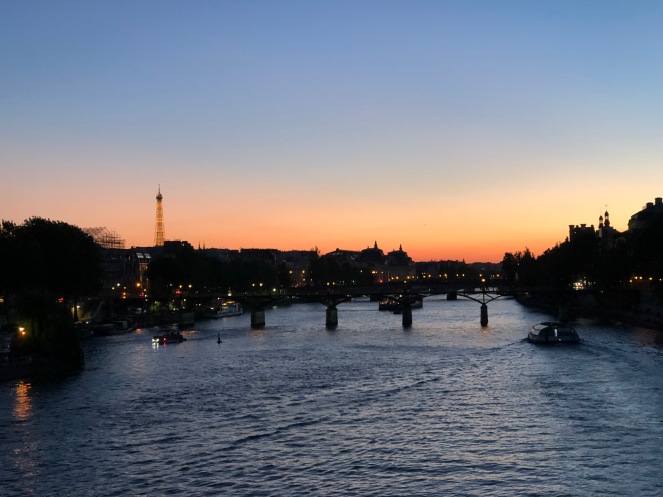 By 10:15, we figured maybe it was 11:00 and the boys talked me into staying to wait it out. But in the end, it was the littlest man who just couldn’t make it. We had had a full day with lots of walking! Knowing we still had a 20 minute walk back to our apartment, he was too tired to wait around until 11:00 without collapsing and so we had to call it. Owen was beyond disappointed.

Walking back, I felt so sad that we’d missed it but thankfully, we’d been able to see it once before an if we are lucky, maybe we will be able to see it again before we leave France…