We arrived to Bordeaux as our 3rd stop on our western France adventure. As usual, we arrived mid-afternoon and wasted no time setting out to find an afternoon treat- for us, it’s always coffee. We were happy to read about La Pelle Café which was listed as one of the top best coffee shops in Bordeaux and close to our apartment. 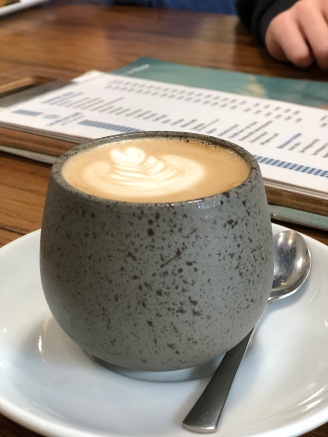 We all ordered coffee or tea, but Wells ordered cake. He was the only smart one. At first he was disappointed because he “accidentally” ordered the pistachio cake, but boy did he choose well. It was a giant slab of yummy moist pistachio cake with berries and he was NOT in any mood to share a bite with any of us. Only a crumb. Literally, he handed each of us a crumb that only he could select.

We walked around a bit through the neighborhood, Chartrons and it was really a charming little area- lots of old beautiful buildings with many cute shops, antique galleries, art studios, bakeries, bars and restaurants; it had an artsy feel to it… and I especially loved all the ivy growing on the old buildings… 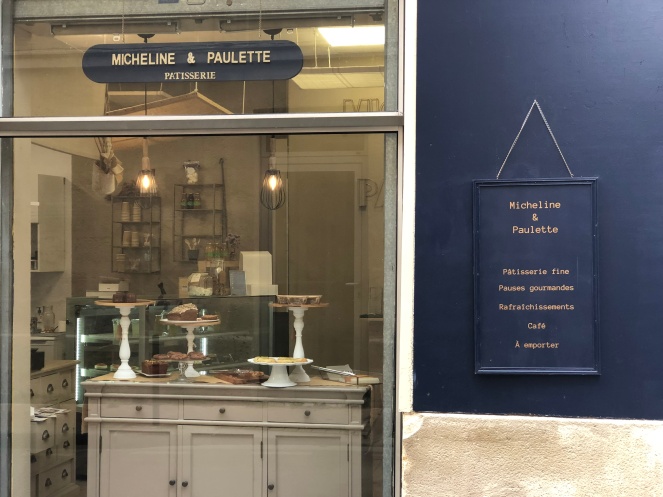 Our air b&B was super cool, owned by a photographer and composition writer, it was quite creatively decorated and was on the 4th floor of a really old building. Too old to have an elevator, I guess, because it required us to haul all of our things up 4 flights of old wide stairs..

After getting settled, C and I headed out to the grocery for some things to cook for dinner. We opened a great bottle of Pessac- Léognan, a wine from this region of Bordeaux that we haven’t known much about, but it was delicious! 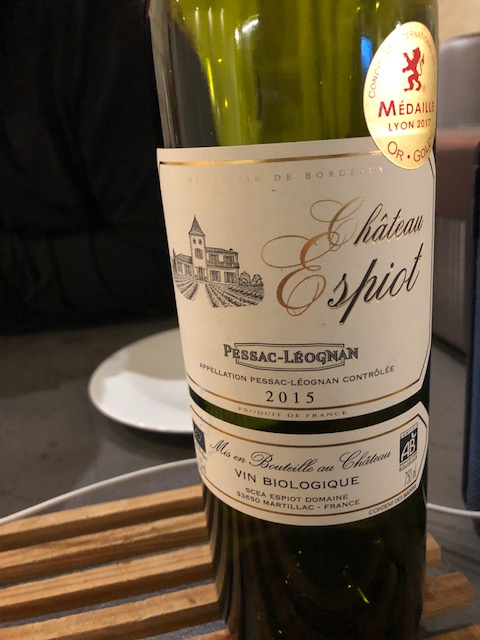 The second day we found another cute coffee shop called “Sisters” that might be one of the cutest coffee shops we’ve visited. 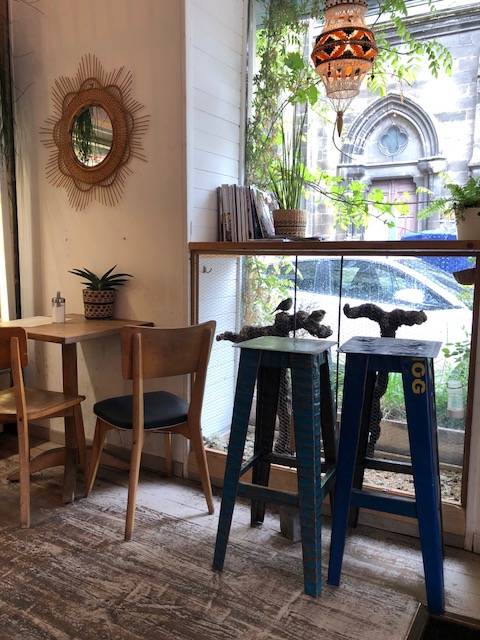 Look at these tiny birds inside a simple cage under a makeshift countertop! I immediately messaged both of my sisters to tell them about this little place that made me think of them….

I didn’t love the coffee, but perhaps it was the hot chocolate I should’ve ordered… 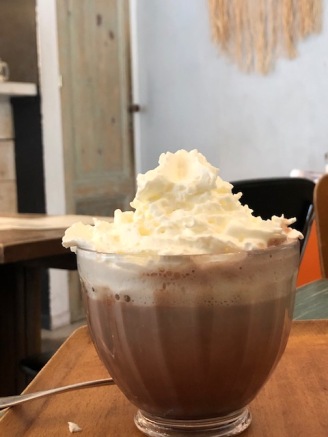 After fully armed with caffeine, we drove 40 minutes out to The Great Dune of Pyla, the largest sand dune in Europe.  This huge sand dune (known as Dune du Pilat), sits on the Atlantic ocean with the Arcachon Bay to it’s right. 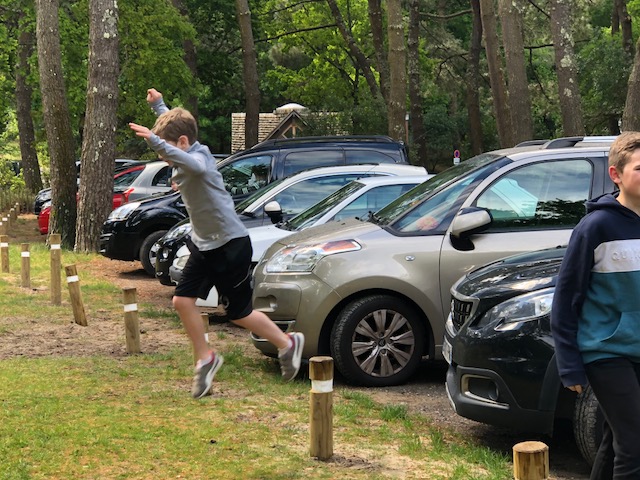 When arriving, we walked through a sandy forest out into the opening where the dune sat menacingly high in front of us, 107m high to be exact!

It is actually a foredune, a ridge of sand created by strong winds over time runs parallel to the shore for its entire 3 kilometer length!

It was absolutely HUGE.

As we climbed higher up this much steeper forest side, the breathtaking view of the forest lay behind us. We were literally so high, it was like a blanket of green below us!

Once we reached the top, the crystal clear blue ocean lay out in front of us.

Ocean in front of it, the giant forest behind it. 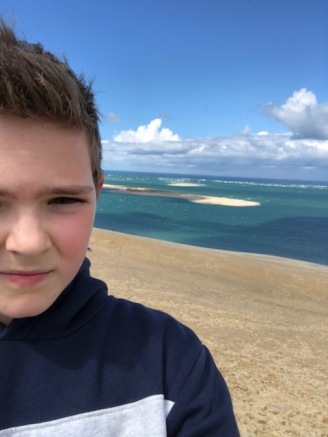 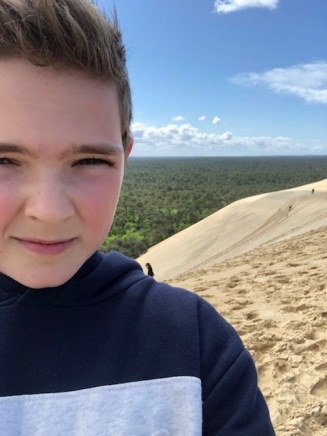 As a result of wind, interestingly, the sand dune is moving backwards away from the ocean and into the forest at 1-5 meters /year!

It was soooooo windy up top and freezing!

But we had the best time running down the dunes and back up (which was definitely a workout!)

We had arrived right after a rain storm, so the sand was cold and wet, but so soft 🙂 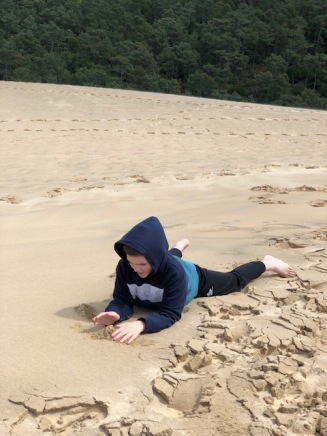 It was so fun to play in. 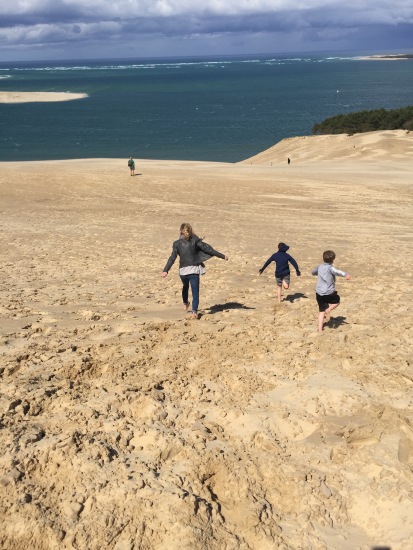 Despite the wind/cold, we couldn’t pull ourselves away from this view..

After hanging at the dunes awhile, we drove into the town of Arcachon for lunch. It was a cold and windy afternoon, so as much as we’d fantasized about sitting along the ocean, out in the sun, eating oysters, the weather was not cooperating- so we found a brasserie further in towards the town center, La Gambetta, with a pretty good variety of things. 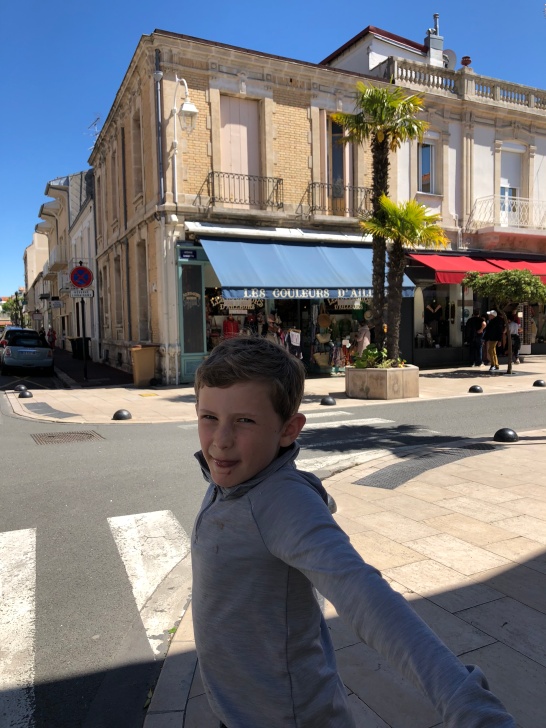 We headed back to Bordeaux to explore the city centre itself. While walking through Esplanade des Quinconces, we found the biggest antique/flea market we’ve seen yet in France. 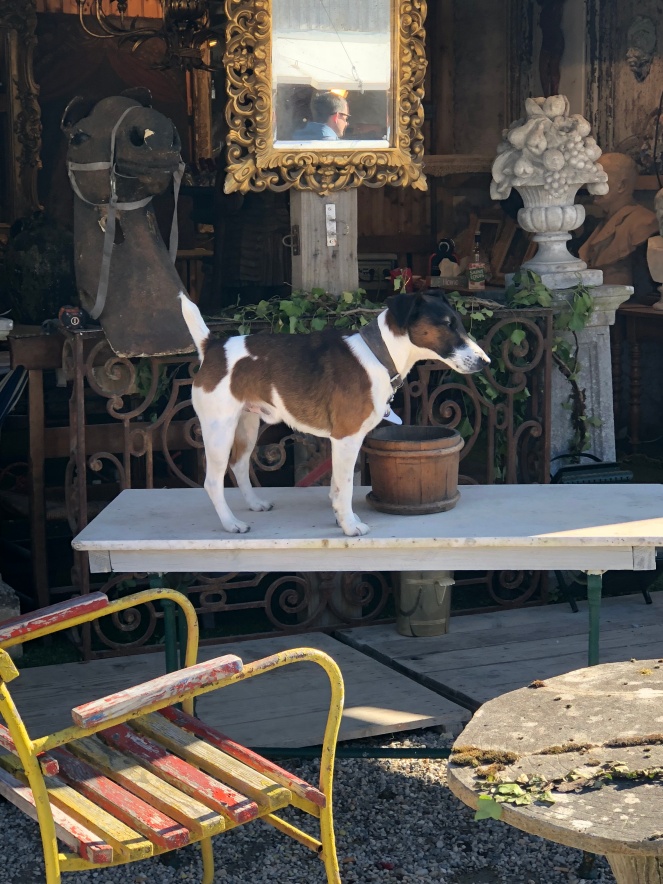 and of course we had to go to the Apple store….

We walked down Rue St-Catherine, the longest shopping street in Europe….1.2 kilometers long! 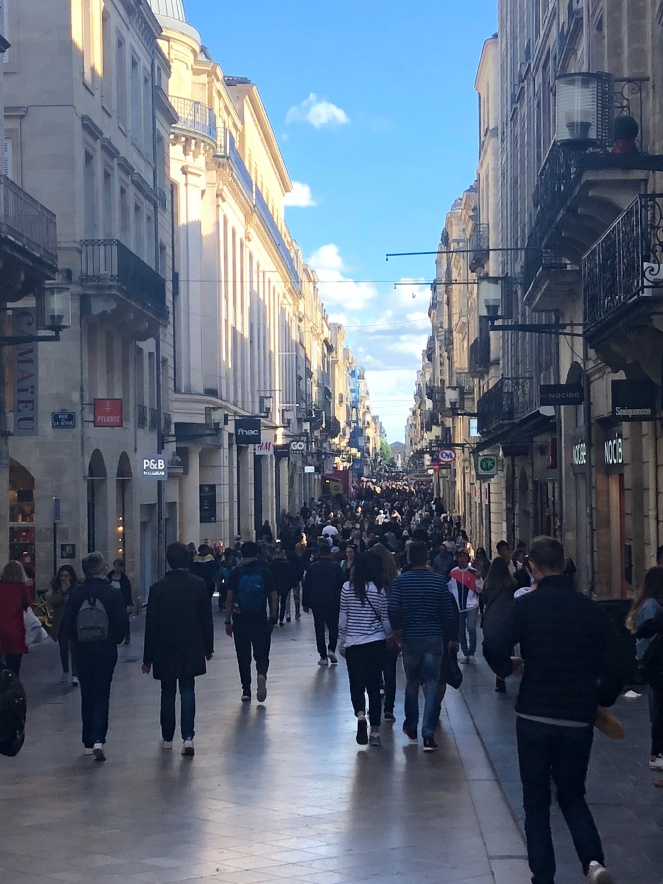 Bordeaux is seriously the most beautiful combination of big city, a mini-Paris, with all of its’ big old historic buildings and churches…in fact, it is listed as a UNESCO World Heritage Site for its’ unique pre-18th century architecture, and is 2nd in France behind Paris for number of old buildings…

but sooooo much cleaner…

….and sitting down in the southwest region of France, with palm trees everywhere, which remind you that the ocean is just a hop, skip and a jump away…

and with the bluest sky, it was more indigo than blue… especially at night.

We ate dinner here at this Italian restaurant- La Murano, which was delicious. The oreo tiramisu was a hit….

Lunch the next day at Bacalan Market….. 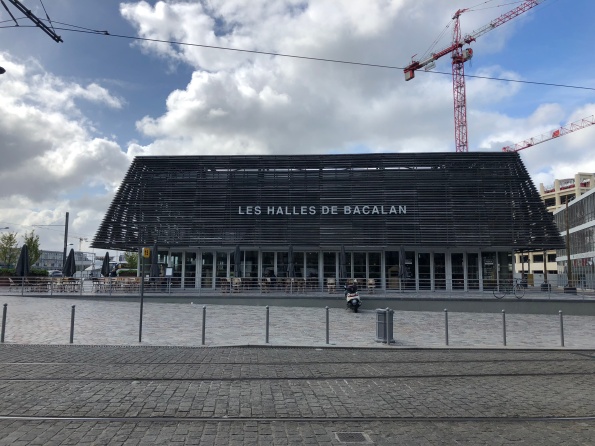 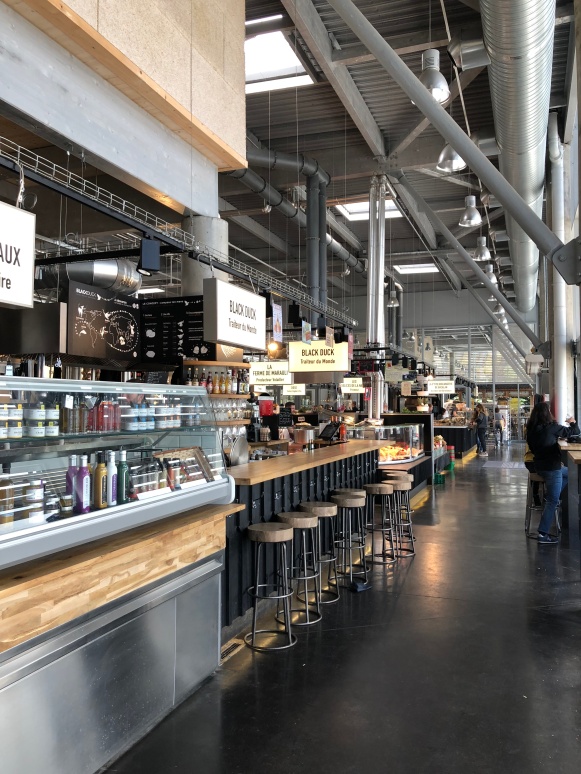 Considering that Bordeaux is one of the most prominent wine-producing regions in the world, we couldn’t leave without a visit to La Cité du Vin, a beautifully modern museum dedicated to educating each visitor about all things wine.

We weren’t sure how interested the boys would be in spending a few hours in a wine museum, but we were pleasantly surprised. We each had a self-guided tour to listen to while walking around. They had plenty of hands-on, high-tech and interactive exhibits that were great for (and a few even geared towards) kids.

One of our favorites were the aroma jars where you could actually “smell” all of the words that one uses when describing wine… By squeezing the bulb, you would then get a whiff of different smells, for example, “leathery” or “berries”, “musty”, things like that.

It is really amazing to learn just how many different wine regions cover the world! Each with their own soil, climate, grape varieties; no wonder there are so many different types of wine! 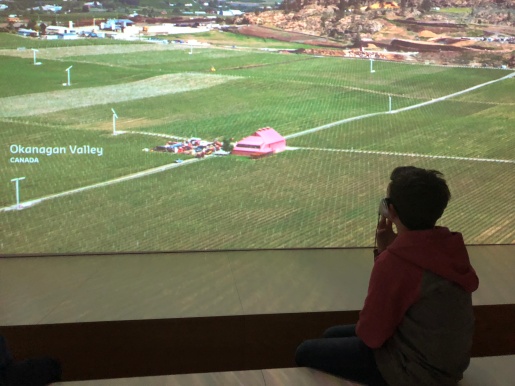 French law prohibits consumption of wine inside museums, but our tickets included a glass of wine up on the top floor of the building that housed the museum, and grape juice for the boys. 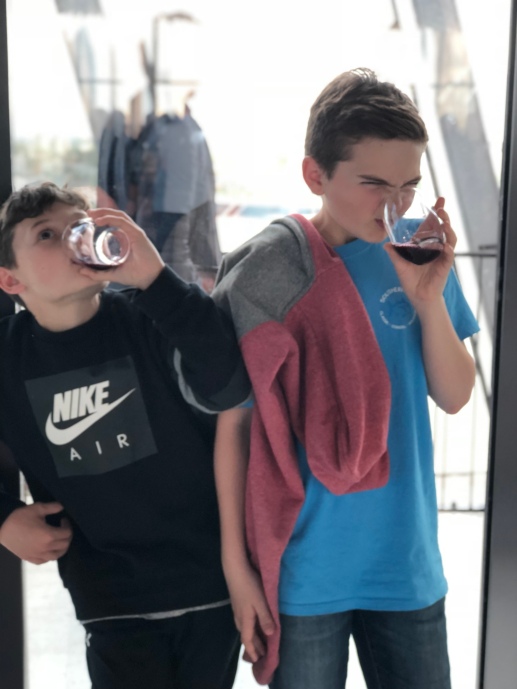 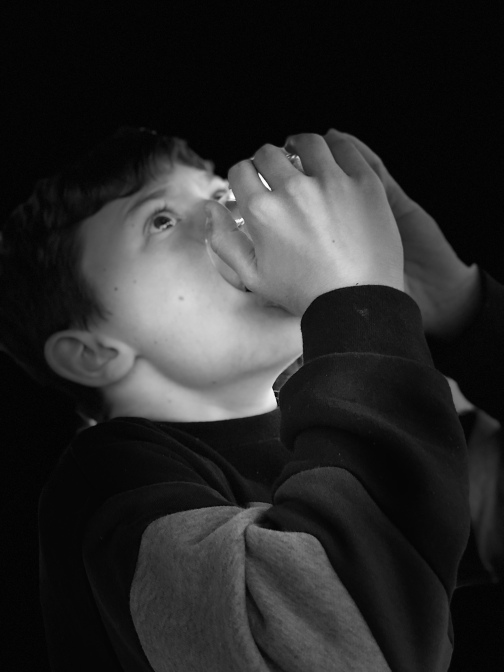 Putting everything they learned into practice. I love this pic because it sums up each of these crazies. Charlie will someday really take his time to analyze what it is he tastes and smells; Owen will drink it down without a thought, and Wells will be more interested in what other uses he could find for a wine glass….

Dinner that night was back at our apartment; we were wanting a break from all the eating out, so we decided to embrace the local cuisine and try our hand at steak bordelaise… I never realized until coming to Bordeaux that the steak with wine sauce recipe we started making shortly after we got married actually originated in Bordeaux!

The last morning, we went to see the Water Mirror at the Place de la Bourse. Only 2 cm deep, this giant reflecting pool is the biggest in the world and is a UNESCO World Heritage Site, offering beautiful mirrored images of the old buildings that sit nearby.

The pool cycles between fog, mirror and pool and completely drains between each different phase… 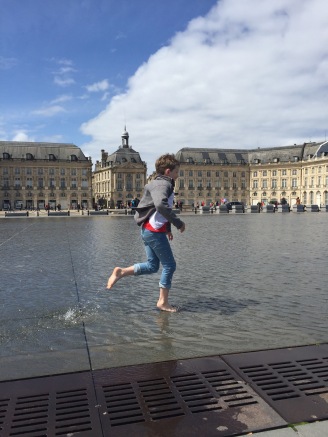 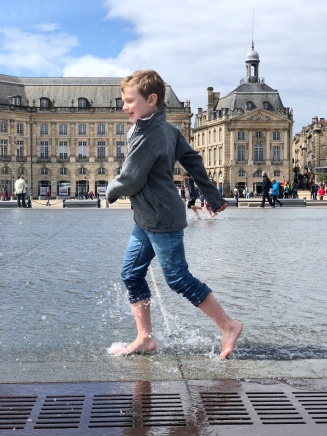 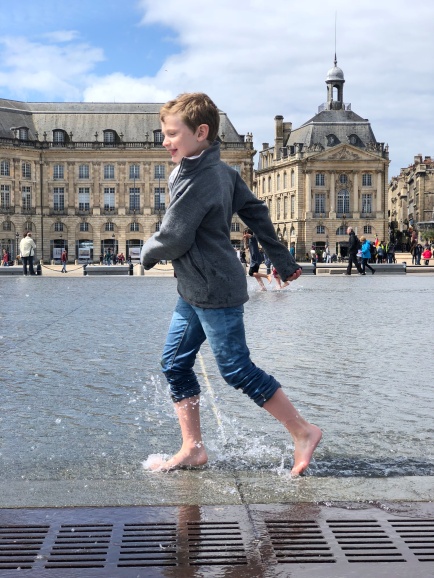 I read somewhere that it is the most photographed site in Bordeaux… speaking of, I had to snap a pic of this couple, who literally were doing all kinds of acrobatics the entire hour we were there…

It was time to head home, but a new place had been created in our hearts for this incredible city…only 3 hours from Clermont, it’s hard not to regret waiting so long to get here, but if we are lucky, maybe we can squeeze in one more visit before we move home to America…

On our journey home, one of the greatest finds yet at the million rest stops we have now visited all over France… a sausage that was as tall as Wells.. 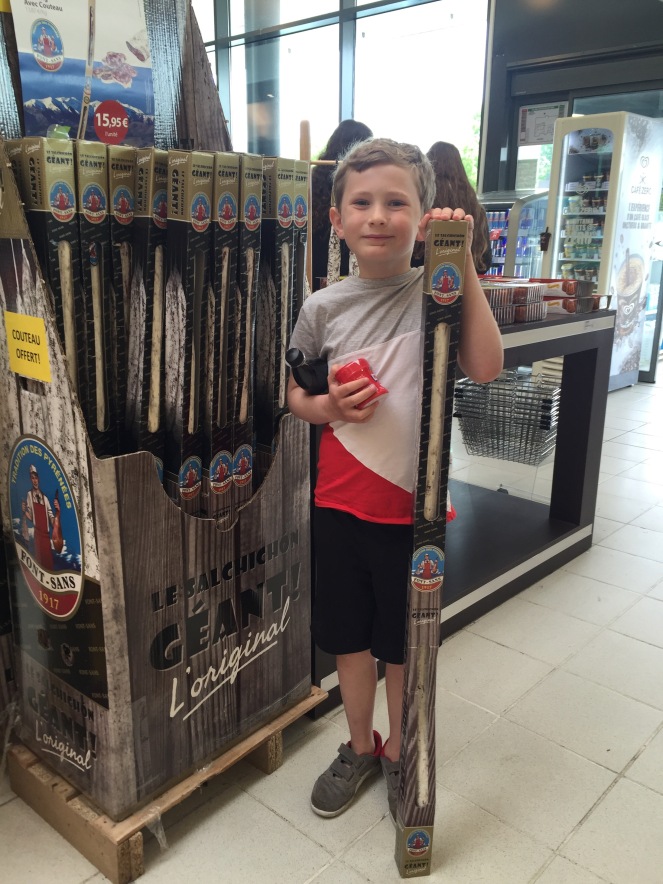 16 Euros of dried sausage…. I can’t even imagine how many charcuterie boards this would last us….

And finally, a beautiful rainbow sitting in front of our giant volcano to welcome us home… 🙂